(Tokyo, Japan/New York, NY) Sony Corporation (hereafter “Sony” or “the company”) this week celebrates its 50th anniversary of becoming the first Japanese company to be listed on the New York Stock Exchange (hereafter “NYSE”) on September 17th, 1970. The NYSE listing marked the beginning for Sony as a global company, and since then, the company has grown to become a “creative entertainment company with a solid foundation of technology.”

The decision to list Sony on the NYSE came from Sony co-founder Akio Morita, who believed that selling Sony stock in the U.S. was an important way to diversify funding sources and raise awareness of the Sony name among large numbers of shareholders and consumers. Since then, the company has learned a great deal from interacting with investors from around the world through the U.S. capital markets. By strengthening its involvement in the capital markets of the U.S., which is the global leader in the entertainment industry, Sony was able to acquire Music and Pictures, and develop those segments along with Games as core businesses in addition to its original electronics business. In 1971, the year after Sony was listed on the NYSE, Sony introduced an Outside Director to its Board of Directors, and has continued to evolve its corporate governance along with the growth of the company. 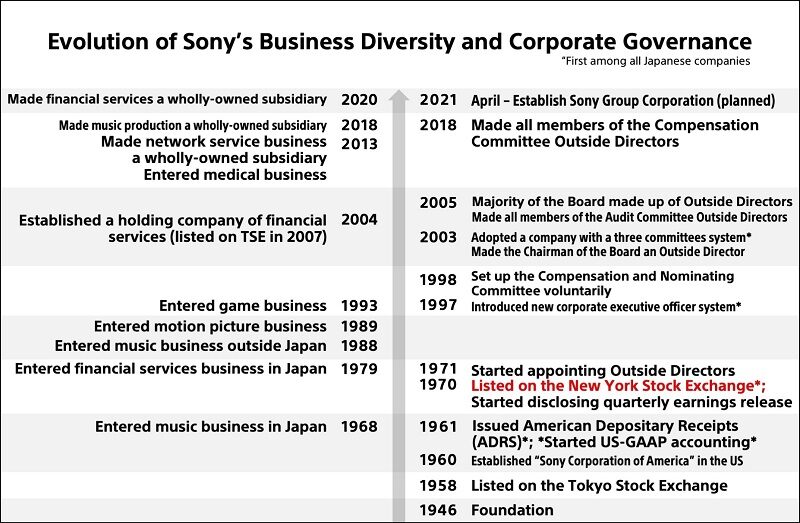 To commemorate the 50th anniversary of Sony’s listing on the NYSE, the company is launching a new campaign website that highlights the company’s history and its latest efforts to combine its diverse businesses with cutting-edge technology.